The TriBattery Pops’ latest album, “Turn On, Tune Up, and Drop Out” — which features a choir of elderly singers crooning psychedelic hits from the ‘60s — has garnered a surprising number of fans in France.

Neither rain nor sleet nor snowzilla will keep the Pops from their appointed rehearsals! The new season is here, so get your dancing shoes ready… 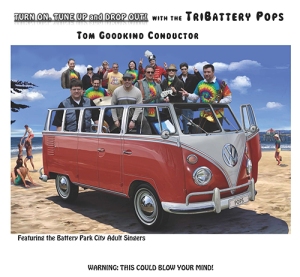 Our new album is almost here! No need to line up for your copy – listen online here!

The Pops extend their 2015 tour to fall for two great events in Battery Park City:

Sunday, September 20th: Battery Park City Block Party. Rock out on the Esplanade at Liberty Street starting at 11am

See our 2015 Tour page for all of this years gigs.

The Senior Chorus joined the Pops this Saturday at the Bogardus Viewing Garden spring opening celebration. This annual event featured performances from many great groups in the community including stiltwalkers from Children’s Tumbling. This year, we learned how to tune in, turn on, and drop out from experts from the 60’s on the mic for some psychedelic tunes.

The cold hasn’t stopped us from rehearsing for our new psychedelic album. We have some great tunes in store including Jefferson Airplane, Donovan, Jimmy Hendrix, of course classic Beatles.

Can’t wait for our spring tour dates? Don’t let it weigh on you! Warm up with another Beatles track from our 2012 album, Dark: “I Want You (She’s so Heavy) (The good parts version)“

Check out our Jazz promo in this week’s issue of CMJ Weekly!

And listen to the signature track off our latest album, Be Flat, also available on CMJ.

Let the Pops chase your end of summer blues away at the annual Battery Park City Block Party, this Saturday, September 27.
Don’t miss us on stage at noon with songs from our latest album, Jazz.

From Downtown Express, week of June 19:

Tom Goodkind, conductor of our favorite local marching band, the TriBattery Pops, tells us the powers that be at the M.T.A. won’t let them play the classic Billy Strayhorn tune — made famous by Strayhorn’s musical mentor and collaborator, Duke Ellington — at the grand opening of the Fulton Center subway station next Thursday.

Goodkind said Assembly Speaker Shelly Silver’s office has been helpful making the case for the Downtown band to play for free, but the idea remains stuck in the station.

Naturally, he does not have good or kind feelings toward the snubbing authority, particularly after rehearsing the song for six months.

“The Pops officially at this moment think their new station looks like a small office building in Cleveland,” Goodkind wrote us. “If they ever need to keep a non-corrupt set of books, don’t count on this C.P.A.!”

Catch the Pops at Irving Plaza on June 9, sharing the stage with Peter Murphy of Bauhaus and Ringo Deathstarr. This gig is a must-see!

Get your tickets here: http://concerts.livenation.com/event/00004C6EE4D0A39E